Saint Agnes:  Today I wish to take you to our Holy Mass. It differed a lot from your Holy Mass, but not at all in the forms. Mainly in the spiritual part. Forms changed over time and they were also dependent on the place where the Sacrifice was performed, but it was always the Sacrifice of our Lord and we participated in it with true faith. This was the main difference separating our times. While an exception happened at the Holy Mass, a person with an impure heart who did not seek God, your Holy Masses gather people who do not participate in them at all. They do not pray. They are only present with the body, but not the heart. Such people are the majority. In my times, going to the Holy Mass was already a profession of faith and a sacrifice for God, because there was always a threat of falling into the hands of persecutors of Christians, of whom there was no shortage at that time. After each Holy Mass, my soul was strengthened by a great hope and new graces. I knew that this Holy Mass has effects for my soul in eternity and that they last independently of what will happen to my body on Earth. It was a treasure that we were accumulating in this life, risking the loss of the temporal life. Thus, we valued this brief time of experiencing the mysteries of our faith in communion with those who believed in the same way. We valued our common prayer at the voice of the priest and staying together if only for this short time face to face with God present among us. The Holy Communion that we received could be our last meal for the road to Heaven, for the time of trial and persecution. The time of the Holy Mass elapsed inexorably quickly, and we had to go back to our homes and to the society in which talking about the things that mattered the most to us, Christians, was dangerous. 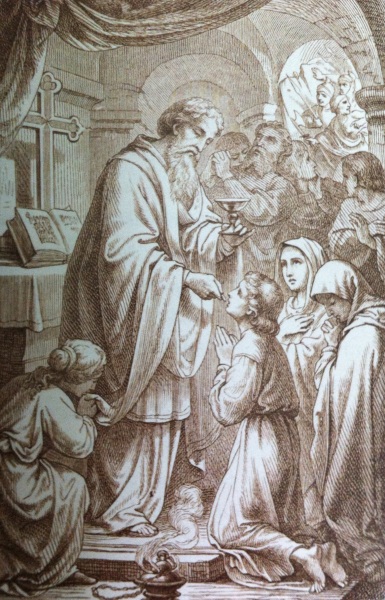 The blessing of the priest was a strength that was carried out from the Holy Mass. It had to be enough for all the time until the next Holy Mass, which was never a sure thing, because at each subsequent meeting we were hearing about further persecutions. We prayed for those who did not come anymore to the next Holy Mass, for those who suffered in prison and were condemned to death. We prayed for those who were in imminent danger and for those who have already made a sacrifice of their lives. Our thoughts and desires were close to God. We were learning bravery and the price that must be paid for faith. From the Passion of our Lord Jesus, we drew courage and strength to abide in the faith and to stave off fear. We asked for the gifts of the Holy Spirit for the whole community of Christians, and especially for the hour of trial, so that we may be able to keep faithfulness. The great testimony of those times was the fruit of the great prayer of entire communities, and not only of individual holiness. People made a sacrifice to God with entire houses, from the youngest to the oldest. These were not individual occurrences, but the sacrifice of the whole Church. You are lacking among you the spirit of community, the love for the Church and the prayers to the Holy Spirit for each other, but the most lacking is the faith in the living presence of God during the sacrifice of the Holy Mass and in His action bearing fruit in real effects for the temporal and the eternal life.

Each Holy Mass is in a way a separate world, which gives back to us its riches for a sincere movement of the heart. Only this once we can receive them and keep them forever. The next Holy Mass those are already different gifts and different graces, but not the same. The grace for a specific moment can not be repeated anymore. These graces are close to one sigh of the heart, but then they disappear. However, during this moment, we can obtain them and then they last forever, for all eternity. Do not waste so much the time of the Holy Mass, because it is a grace the meaning of which you can not even imagine. You can participate every day in this grace, and you do not do it well even once a week. You will not obtain anywhere such great graces as during the sacrifice of the Holy Mass. Only from this Sacrifice flows such power and depth of unity with God, connecting the soul forever with the Person of the Savior. It seems that only saints should live on Earth having so many Holy Masses and so many opportunities to make use of their graces. If you had our faith and so many Holy Masses at every step, you would become a society of angels. Ask the Holy Spirit for true faith, because you have the Holy Masses, and what they will be like depends on your faith.

Image credit: “He has all those freed who, through fear of death, throughout their whole lives to bondage were subjugated” by Holy Card Heaven, attribution © Creative Commons License.