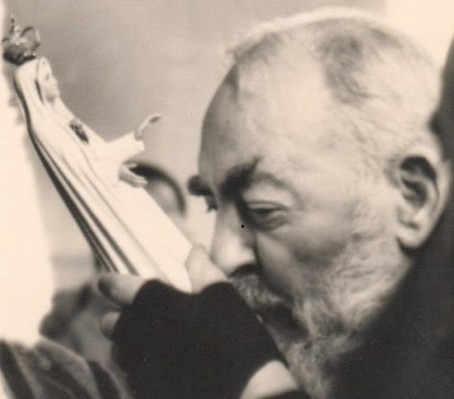 IV.  POST-CONCILIAR REFORM AND THE ROAD OF SALVATION FOR THE POLISH CHURCH

St. Padre Pio:  Daughter, we have already talked about the fruits of the Holy Mass, and now I would like to tell you about the dramatic changes which were introduced by the Vatican Council and which were not foreseen by the church authorities of that time. The hand of the devil was involved in many reforms and he did it very intelligently, leaving everywhere his loopholes. The rules and regulations do not have anything wrong in themselves, but they have opened many doors, through which came a lot of improprieties.

You see daughter, many rebel against and are outraged by these words, but I will remind you of other words, words that were spoken by Jesus, who said: “You will know them by their fruits’’. So consider carefully the fruits of these changes in order to recognize that they do not come from God. [1] People’s faith has been reduced; [2] progression of a general moral decay in societies; [3] entire nations have renounced the faith; [4] a part of sins has been legalized; [5] the Catholic Church became divided and quarreled from the inside; [6] the pope lost his position; [7] the priesthood lost respect and deference, downright its social status; [8] monastic houses fell into stagnation, and [9] afterwards into utter ruin; [10] many monasteries collapsed, and [11] many religious orders are at the end of the rope due to the lack of new vocations; [12] in many countries, young people no longer receive the grace of vocation; [13] the churches, built by the sacrifices and the work of our ancestors, are now sold by their children and grandchildren – those who took away the bread from their mouths in order to give glory to God, are turning in their graves upon seeking to what end now serves their work; [14] the liturgy underwent dilution and an all-encompassing mediocrity; [15] entire societies departed from God: [a] children, [b] adolescents, [c] young couples and [d] loners. They were all once fed by the Church and in it they were looking for support and comfort. Now this function, which was fulfilled by the Church, is fulfilled by the television. [16] The devastation of the liturgy has reached such extent, that in some once catholic nations, pagan habits are introduced in the center of the liturgy of the Catholic Church. [17] Nations who have their roots in Christ do not know today who Christ was, what are the basic rules that He preached, what are the commandments, and what is eternal salvation. The entire Church and its knowledge, preached and sanctified by the blood of the martyrs, is considered to be one of the many invented realities in which a certain weak segment of society wants to believe. I say so with the full knowledge that unfortunately those are just some of the fruits of the post-conciliar reform.

Rebuilding the destroyed Kingdom is much more difficult than creating a new one with a cheerfully “hurray’’. I speak about the Kingdom of God on earth, which is the Church. All of this is the fault of the pride of those who created this reform, and of those who wanted it, in order to change what has been established and grounded through centuries by holy and inspired minds of the Church. Now all of this is ruin, my daughter. The Polish nation is still surprised at those words because after all, in Poland, due to the Mother of God, the devastation has not progressed yet so far. This is why people are beguiled by their well-being and asleep towards the upcoming evil. This evil did not come to you yet in such a form in which it is already present in other European countries, but it is progressing more and more boldly, of what you have visible signs from time to time. The attack on the most holy image of the Queen of Poland is only one of them.  If it was done to the image of the president, it would have been a big affair with far-reaching consequences; and yet Mary is your Queen. Society is being prepared for the offense of the Blessed Mother. If the public was not moved after such an act, it will not be inclined to do so towards other actions. You are being probed as rabbits to check how deep you are asleep. Through small steps, they will try to take everything away also form you. However, even if they manage to take everything away from you but you do not give up your Queen, they will not succeed.

This reform of devastation has progressed everywhere where there was no Mother of God.  Where she is worshiped, there is the Truth. She must be at the center of the Church in Poland. It was so for the last several decades and this is why the Polish Church did not fall as low as the others, but it is also leaning down and heavily. Thus, I give you now a clue about the only way to stop the onslaught of corruption which encompasses the Church. The Blessed Mother must continue to stand in the center of the Polish Church, in every church must be Her image, in every Catholic home must be Her picture, and the main prayer of the Poles – the rosary. If you ‘’entrench yourselves’’ on time via Mary, they will not manage to kill the Polish faith.

Everything that I have told you with regard to the Holy Mass aims to sensitize you to how you experience it, so that you would not accept unconsciously the changes that are introduced to standardize the practices in the Church. Do not accept them.  Persevere in the awareness of their demoralizing effects. However, I do not want to leave you in sadness, so I also give you the solution and a way of escape from these changes, and that is the reliance of the entire Church in Poland on the Mother of God. That’s all that I wanted to tell you. Increase at the measure of your possibilities your worship of the Mother of God. Like cannons – set out her statues, and have on your lips “Hail Mary’’, and everything will end well. I bless you all in the name of Jesus crucified, in the name of the Father and of the Son and of the Holy Spirit. Amen.